Workplace debates can be a good thing – if handled well by all parties. Learn critical do’s and don’ts for how to engage in healthy debate with colleagues.

Leaders may be tempted to shrink from the idea of debate, or what we perceive as difficult conversations with employees, because most people dislike conflict. It can be awkward and uncomfortable. But as great as it sounds, harmony all the time just isn’t realistic. It’s inevitable that different people – with diverse backgrounds, experiences and viewpoints – will hold varying, and sometimes strong, opinions.

Differences are a good thing. Unless you want groupthink or a culture in which people feel silenced, debate should be an anticipated part of the workplace. It’s positive for people to be engaged and passionate and to willingly exchange ideas. People should be exposed to new perspectives and opportunities to reshape how they think – that’s how your company becomes innovative and how people grow personally and professionally.

The debate just has to be approached in the right way.

What makes for a healthy workplace debate?

Elements of a healthy debate in the workplace:

Participants in these debates could include:

Topics that people commonly debate about in the workplace:

These types of conversations shouldn’t be confused with contentious, emotionally charged conversations that can happen in the workplace, such as discussions around disciplinary issues, performance issues or concerns about unethical or illegal behavior. Instead, healthy debate is more about colleagues helping each other navigate conversations around innovative ideas and new processes for the company.

What to do – and not to do – in a workplace debate

DO: Encourage an open, speak-up culture

If you’re a business leader, think about the type of workplace culture that enables healthy debate long before you encounter the need for a debate. To build that workplace culture, you want to:

These qualities go hand in hand with a positive workplace culture in general. If you do these things proactively and have a good culture to start with, you’ll have fewer problems when debates happen.

If you let negativity linger in your workplace culture, then toxicity will spill over into debates and result in more problems. Examples:

DON’T: Rush into a conversation

DO: Take time to prepare

At times, debates will come up naturally in meetings. Other times, they can be encouraged prematurely. For example, don’t immediately gather your team together and demand ideas on the spot in response to an issue or problem.

Know your audience and all the personalities on your team.

Not everyone likes to jump into brainstorming sessions or troubleshooting conversations spontaneously. Some of your peers or team members might need – and appreciate – an adequate period of time to fully ponder an issue and their position on it before they engage in discussion. Maybe they want to perform some research. It can be a good idea to schedule a meeting in advance to discuss an issue.

Also, set expectations and parameters for any debate in advance. Make these ideas clear:

DO: Stay objective and, therefore, productive

Nothing can derail a debate faster than incivility between colleagues. These behaviors include:

When this behavior happens, productive communication shuts down and the fight between the colleagues overtakes the original purpose of the discussion.

A workplace debate is about a business issue or problem – nothing more. While these types of issues are important for the company’s success, don’t blow them out of proportion and escalate them to a level of personal animosity that’s not necessary or warranted.

During a workplace debate, no one should feel like they’re being personally attacked if you keep emotions out of it. Healthy workplace debates are about challenging ideas, not people.

During a debate at work:

DO: Seek the best idea – not necessarily your idea

It can be tempting to think of a workplace debate as an opportunity to impress someone else, whether that’s a boss, your direct reports or your peers with whom you see yourself in competition for promotions. But that’s the wrong attitude to bring.

When you take on this attitude, there’s an implication that you have all the answers and that you’re always right. You come across as wanting to show off your knowledge and experience, rather than actively listening to what other people are saying.

Instead, leave your ego at the door. This process isn’t about you getting your way.

DO: Give everyone an opportunity to contribute

When you’re in a leadership position or facilitating a discussion, making sure that everyone contributes is especially important. You’ll get the best solutions with everyone’s involvement. You also want to make sure that other people don’t feel dominated or as though they can’t get a word in.

There may be some people on your team who have dominant personalities. But being vocal and passionate doesn’t automatically make those people right or the only one worth listening to.

So you don’t miss the viewpoints of those who are more reserved or introverted, allow everyone to voice their perspective. Encourage those who are being quiet to share their thoughts, if necessary.

DON’T: Resist getting on board with a decision once it’s been made

DO: Accept the decision and move forward

Once a group consensus forms and leadership approves the decision, it’s important for everyone to come together and move forward toward the common goal. Set this expectation early on in the process. Arguments cannot continue indefinitely once the conversation is done – that will only lead to a fractured, negative workplace.

No one should be working to undermine the decision just to prove a point or make themselves look good.

You also don’t want people to carry lingering resentments about how they were treated or the decision that was made. This could lead to disengagement and, ultimately, retention problems.

DON’T: Forget to check the pulse of the group after the conversation ends

DO: Check in with people

For the reasons described above, don’t assume that everyone is fine once the discussion concludes – even if you think everyone’s in agreement. If you’re a manager, you have a responsibility to check in with the members of your team and confirm that you read the room accurately.

This should be a one-on-one, face-to-face interaction – either in person or via videoconference – so you can see their facial expressions and gestures to pick up on cues.

Tell each team member something like, “Hey, I know that conversation was a little passionate and heated at times. Just checking in to make sure we’re all on the same page or if there’s anything else you think we didn’t discuss adequately.” This gives employees an opportunity to air any lingering concerns so you can address them and help that person move forward.

Emotional IQ is a critical leadership skill – know your team members, and stay attuned to signs of anger, frustration or discomfort.

Regardless of your role in an organization, understanding how to engage in healthy debate in the workplace will serve you and your company well. Debate itself can be a desirable, productive activity and can lead to positive outcomes. It also means people are engaged, passionate and open to sharing new ideas with each other. However, the way in which debate happens needs to be approached carefully. Most of the “do’s” come down to practicing respect and consideration for others, being open to others’ perspectives and being a team player.

Are you a business leader looking to facilitate healthier debates among colleagues? To learn more about guiding your team through conflict and disagreement, download our free magazine: The Insperity guide to leadership and management. 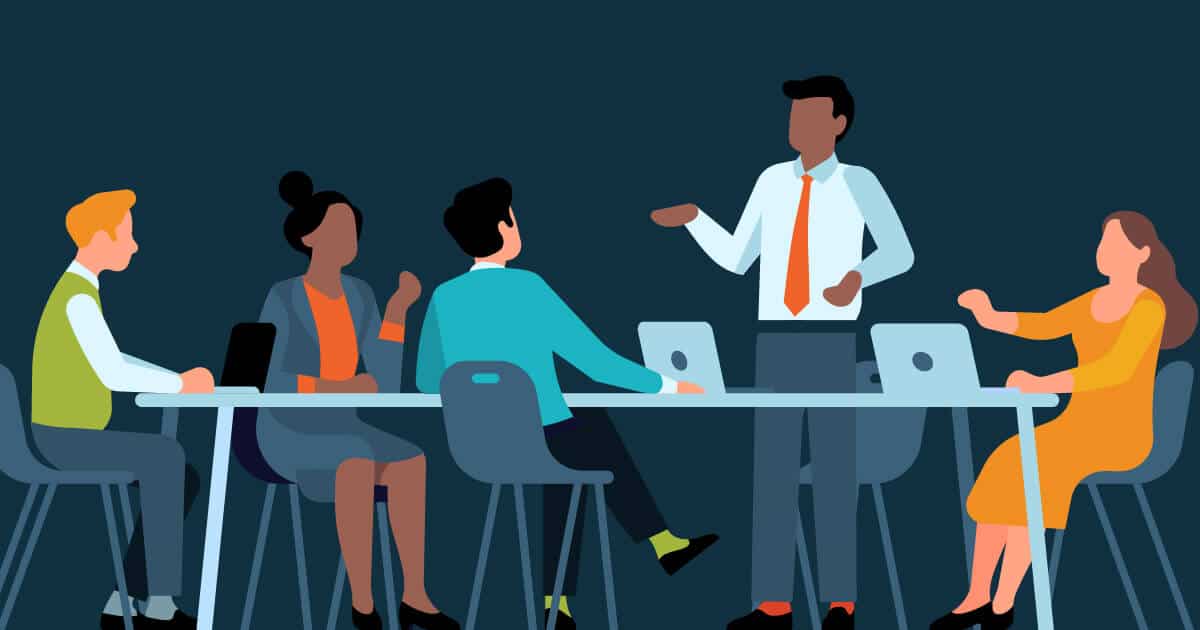